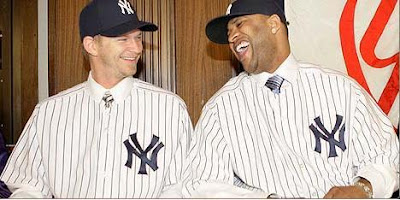 Public speaking is really a lesson everyone needs to learn. After press conference and series of interviews I heard from A.J. Burnett, I really learn to like A.J. Burnett. If he can manage to stay relatively healthy during 5 year contract, he will be one of Yankees fans' favorites.

Burnett showed off good sense of humor during press conference and interviews, such us media issue, DL issue and Jeter's recruiting call, etc. I actually was persuaded by Burnett why he finally stays healthy and has a career year by changing from a thrower to a pitcher. The way he answers questions leads me to believe Yankees' spotlight may help him. By the way, I like the idea to recruit Roy Halladay when he becomes free agent two years later.

CC comes as advertised. He looked a little bit nervous, but he certainly well prepared for specific questions. With time going by, CC became a little more relaxed and showed more his real personality. Based on what I heard from CC, he will love to pitch in New York and Yankees fans and players will love to have him as well.
Posted by： Jessica Lee at 7:55 AM

I'd love to see Halladay in pinstripes. He'll be 34, but he's a smart enough pitcher that I think he'll be able to adapt his style as his velocity diminishes with age. He's also a "finish what you started" type of guy, which I admit I have a bias toward.

Best of luck trying to get Halladay to New York, it'll NEVER happen! Oh and while you're at your daydreaming you can dream about Burnett trying to get 12 wins this year. He's a headcase and he'll wind up on the DL before the season even starts! You'll be as excited with his as you were when you had Pavano and Jaret Wright! What, too soon?

Sabathia is great though.

Pavano and Wright (and many others) were both brought in under the same false assumptions that Burnett was overpaid for - that strikeout rates and success against NY will translate into success against everybody else (despite all the other evidence to the contrary). Pavano, in particular, had one good season in a sea of mediocrity, but the Yankees seem to think that anyone that is successful against them is the [echo]Greatest Player Ever[/echo].

Halladay, on the other hand, is a legitimate ace with a long track record. I haven't any idea if he'd want to come to NY or even if it would be an option at the time he's a free agent. So, yes, it's pretty much daydreaming, but there's no harm in dreaming and it was related to the press conference.

No one can predict the future. No matter which team you root for, you should have some players on other teams you would like to have. There is nothing wrong to hope we can sign him two years later.

We will see how A.J Burnett perform. Again. No one can predict the future. Once he joins my Yankees family, I will root for him as hard as I can.

Looking for cheap tickets to see the Boston Red Sox? Vividseats.com has them all! Find the best deals on all MLB baseball tickets, NBA tickets, tennis tickets, NHL tickets, NASCAR tickets, and all concert tickets